In response to Emily Speed's contribution to our video series ‘What do Axis artists do all day?’, this week we've selected five artists who have considered the links between architecture and power as part of their practice, featuring: Steve Messam, Pandora Vaughan, Andrew Howe, Dorothy Hunter and Douglas Clark.

Watched is a series of temporary works in disused and historic architecture in the landscape around Hanstholm, Denmark. The various buildings, originally for watching and waiting are now watched over as visual accents in the landscape and identifiers of moments in history and time.
Watched temporarily transforms these unremarkable artefacts with a playful use of colour and form where the gaze is altered and their role in the wider landscape is elevated for a short time, and then gone.

The three main locations are very temporary and will be documented with photography. Large format prints - one of each location - are to be presented at the exhibition. The photographic documentation capturing a slice of time - a fragment of the narrative of the architecture in the landscape. 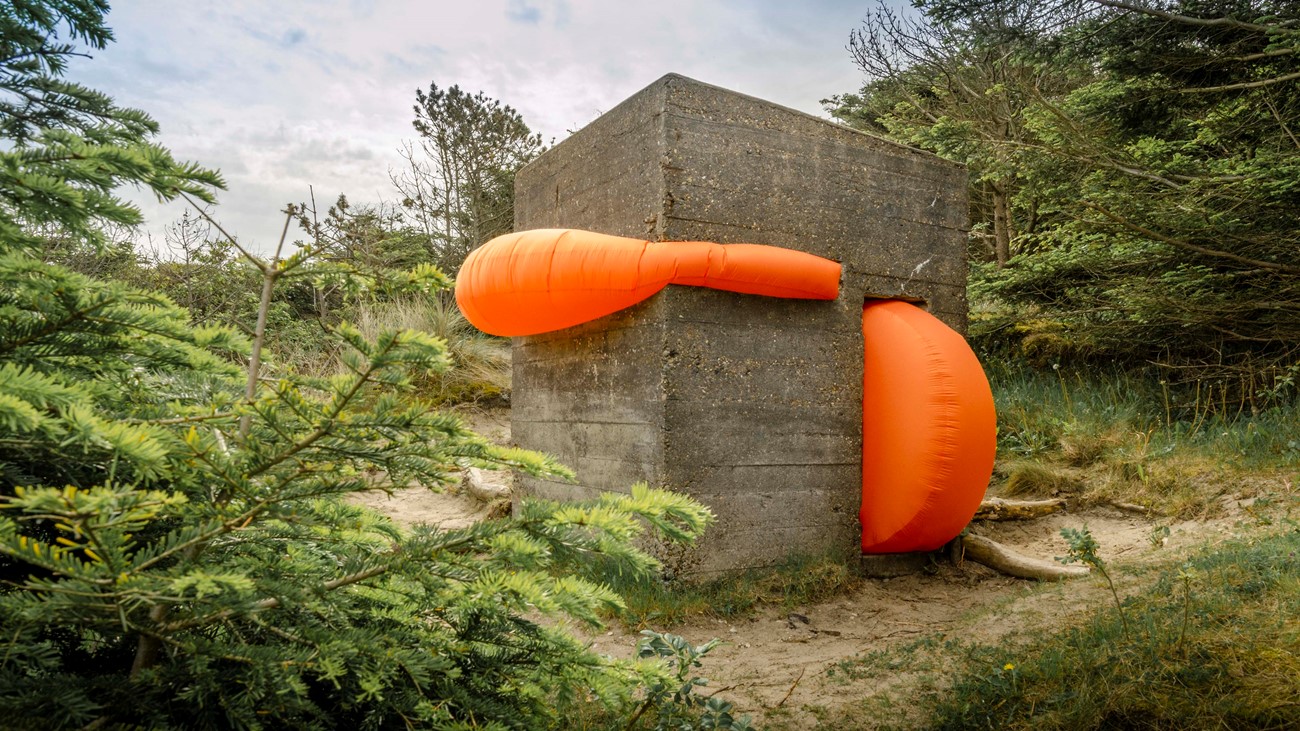 Extension of the Out of Space series, applique & embroidery. 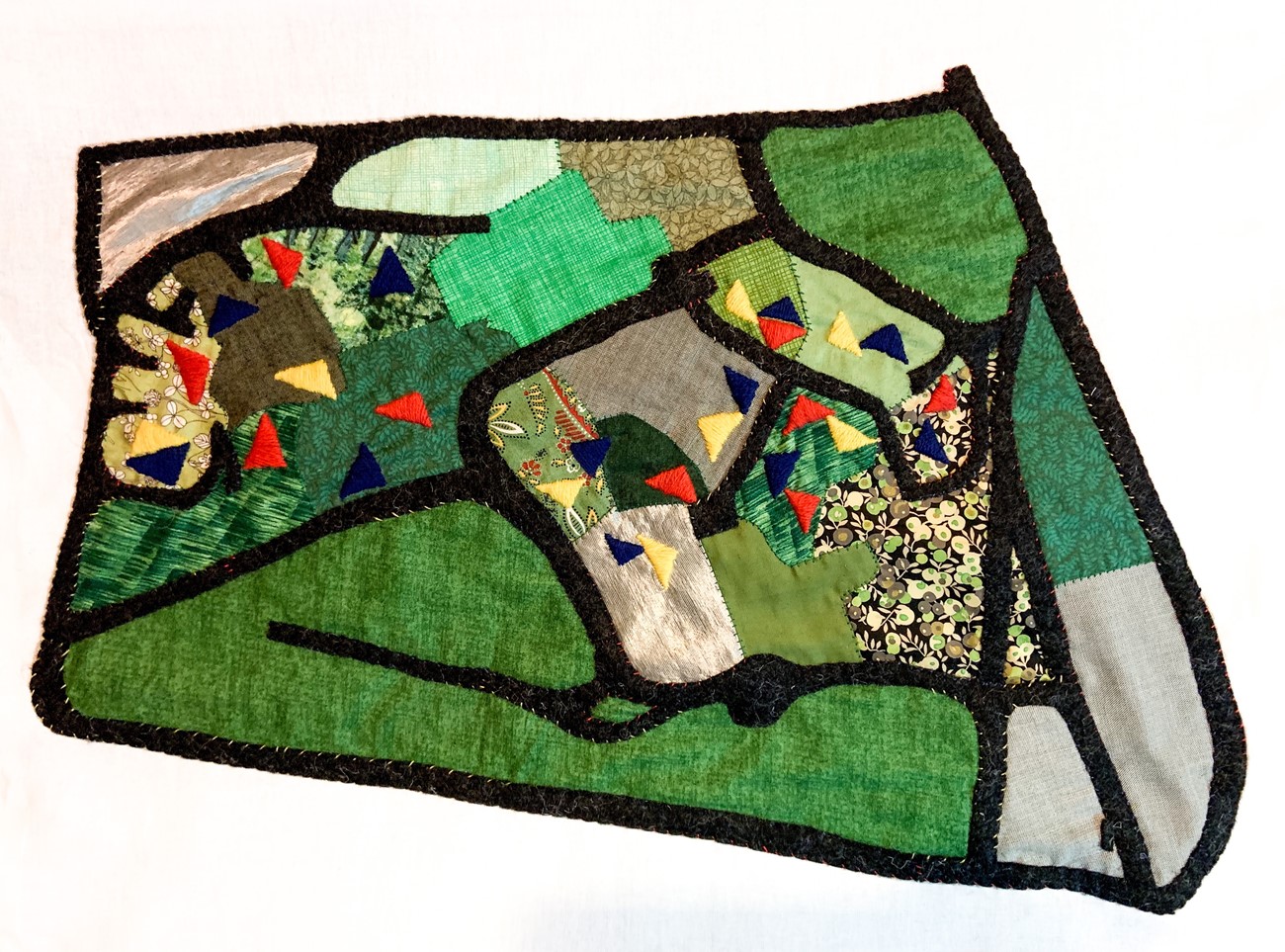 Created in collaboration with poet Kate Innes as part of the Encounters project, exhibited at the VAN Gallery, Shrewsbury, October 2018

From a series of drawings and paintings inspired by walks in Shropshire and surrounding areas, in which I made observations of cabins, caravans and sheds of various kinds. Each place was evidently a place of previous or ongoing habitation, mostly by persons unknown. The circumstances of their abandonment are also unknown or ambiguous, but provoking curiosity. In their woodland surroundings, these places could be viewed as idyllic retreat or desperate refuge.

In these works I contemplate primitive living from ancient human history and a dystopian future. Gaston Bachelard’s “Poetics of Space” was a reference in my reflections on these precarious living conditions. 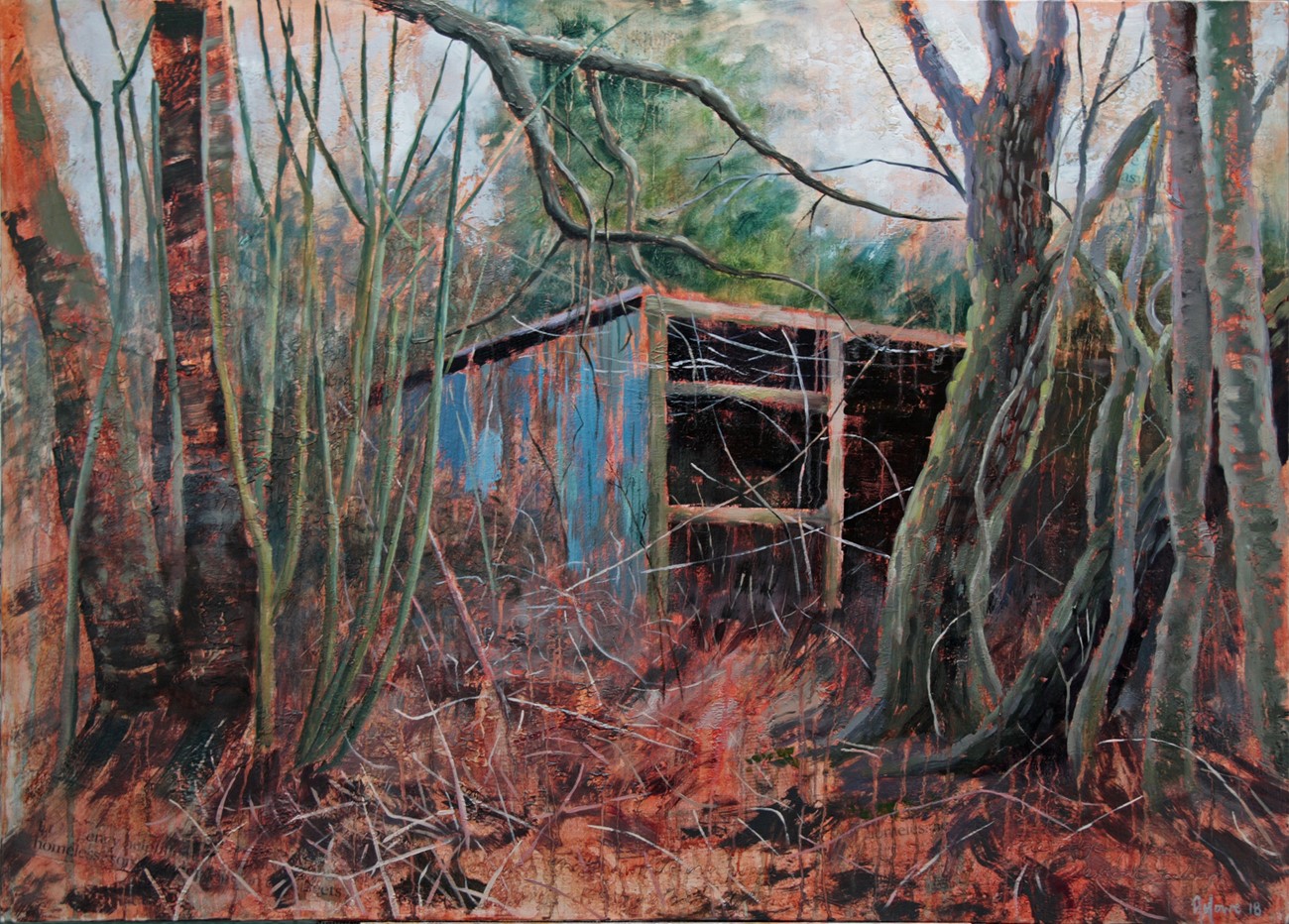 This exhibition is composed of two installations. The first is based on the conflicting planning applications by two non-governmental bodies for a monument in the same street in the Northern Irish town of Magherafelt - one for a war memorial, and one for a statue of Patrick Pearse. The planning permission portal becomes like a public archive, where these theoretical monuments are endorsed or condemned; the proposals in effect not needing to exist to stake their claim on public land. In this installation, somewhere between a museum and a public consultation, third entity is proposed to sit with one, both, or neither of these theoretical monuments.

This work looks at how the Greco-Roman façade has, since the days of the Renaissance, been appropriated by governments, financial institutions and individuals to signify the solidity, veracity and established values of those respective institutions.

These columns and pediments had already acquired the status of monuments to past civilisations as they lay in ruins around Mediterranean Europe and North Africa. Architects such as Palladio saw their significance and grafted them on to otherwise four-square buildings, turning them into palaces of grandeur and power and in doing so, gave what we take as the 'Establishment' a sense of history and stability.

Have we been misled by this? Should we consider the other meaning of the word 'façade' where the intention is to deceive? Are these institutions without substance their continued existence shored up by rudimentary works from behind that are couched in terms such as 'Quantitive Easing' and 'Fiscal Stimulus'. 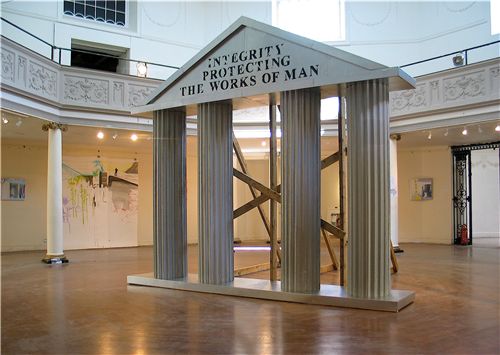