A Forager's Manual; How To Get Lost During A Global Pandemic 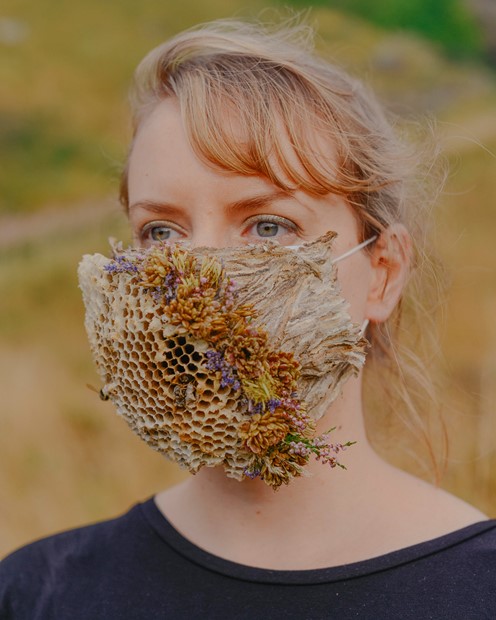 A collaborative project with Edinburgh based documentary photographer Jaime Molina, originally from Colombia.

The 'Swarm’ mask is created from an abandoned wasp nest with foraged wildflowers and is almost paper-like in texture. Emerging from this are wasps, placed by the artist to parallel the fear she initially felt with covid as something unwanted and fearful moving through the air. The mask is unsettling on a number of levels and could perhaps be described as uncanny. Uncanniness is a Freudian term used to describe the feeling of unfamiliar experiences in familiar situations. In unfamiliar situations we expect to experience the unfamiliar and so this does not disturb us. However, if something is familiar but not quite right, this is unsettling. In The Uncanny Freud describes this as a “[particular] class of frightening which leads back to what is known of old and long familiar” (1919, p.219). He explains this in terms of its familiarity, but a familiarity that triggers fear, horror, and terror. The uncanny object is familiar yet strange; we are attracted and repulsed at the same time and this feeling unnerves us. Not only are wasps and wasp nests unnerving but the material is paired with the threat of a very real, deadly virus in a very unknowing time.