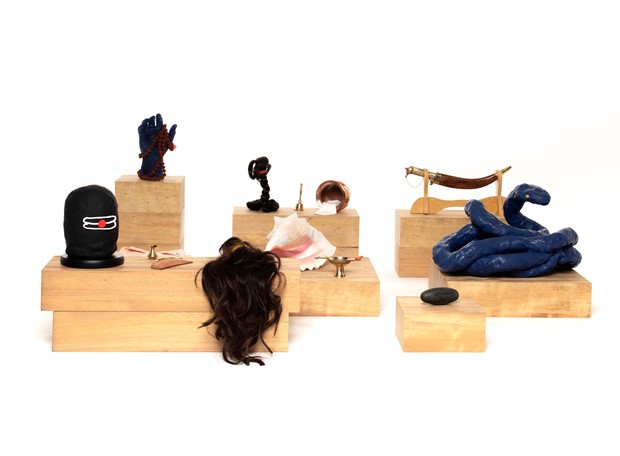 Jan Agha and Roo Kaur Dhissou both make work that playfully complicates ideas around cultural authenticity. Both provide maverick strategies as to how to navigate cultural histories from the perspective of the diaspora. Their works often seemingly draw on specific histories, but in fact in different ways each artist complicates that by picking, choosing and putting together disparate cultural references. The result is less about claiming cultural authenticity but more about negotiating a transient, self-defined subject position that subtly champions the fragmentary, playful, overlapping and improvisatory.

Roo Kaur Dhissou's work features religious objects associated with Hinduism and Sikhism that are sometimes mass-produced, sometimes unique and in one case, 'Shiva Lingam' (2021) made following instructions from YouTube. Kaur Dhissou made the latter despite the traditional Hindu stricture that as an unmarried woman she is not supposed to touch a shiva lingam. The object speaks both of a tradition and also breaking the rules around that tradition in an everyday fashion. What is at stake when cultural traditions can be warped using an internet tutorial? The cluster of small objects, placed low to the floor on wooden blocks, subtly question the notion of cultural authenticity as traditions get translated, half-forgotten and improvised in diasporas. Whilst Kaur Dhissou's homemade Shiva Lingam is deliberately transgressive, another Shiva Lingam entitled 'Shivling' (2021) is perhaps its counterpart in terms of assumed authenticity. It is a Narmada Stone that is regarded as one of the most sacred and powerful stones and is only found in one place in the world, the Narmada River, which is said to have sprung from the body of Lord Shiva. These stones are objects of worship and yet, these supposedly rare stones are widely available on the internet from Ebay or Etsy. Yet Dhissou’s works are not a negative comment of this slide from the sacred to the commonplace through to t