Death to the Fascist Insect 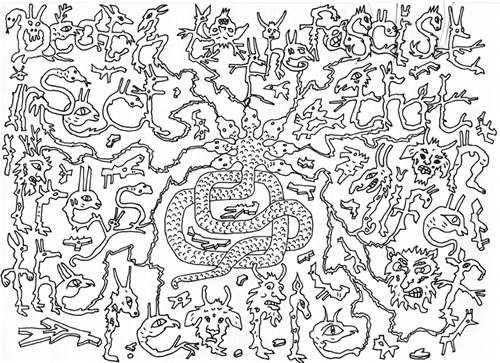 A piece from the 'Dept. of revolutionary rhetoric'
Made in collaboration with Steve Swindells


Drawing of the text 'Death to the fascist insect that preys on the life of the people'. Forms one part of a work which also consists of a sound piece in which we have developed a process of transcribing texts into musical notation. The process involves 'writing' onto a musical software programme. A number of our recent pieces have used political, or inflammatory slogans as the 'base' text from which we then develop a sound-work.

'Death to the Fascist Insect that Preys on the Life of the People' was the revolutionary slogan of the Symbionese Liberation Army (SLA) of (1974). We are interested in this period of modernist 'avant-garde' and political upheaval.