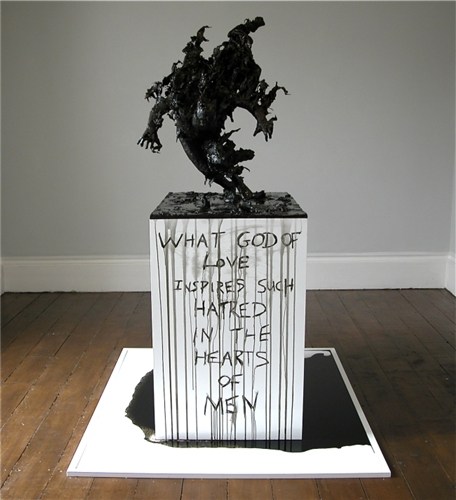 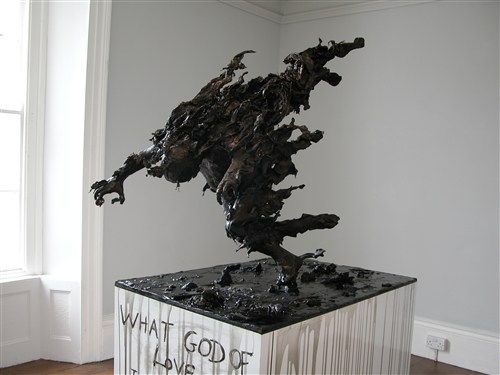 Erebus is about ‘terror’, and was originally conceived in 2007 as a hypothetical proposal for the fourth plinth in response to the US led Invasion of Iraq.

The work is shaped by several events: a visit to Pompeii, photojournalistic images from the Iraq War, the Glasgow Airport terrorist attack in 2007 and a personal experience some years ago of driving into a street riot in Belfast, where all around, cars were ablaze and the tarmac appeared scorched by collective rage.

Erebus (small version) suggests a connection between oil, terrorism and religious ideology and asks the question: ‘What God of Love Inspires Such Hatred in the Hearts of Men?’ Oil spills down the sides of the pedestal collecting in a pool below symbolising the blood spilled in conflict and hints at one of the reasons why we go to war. Erebus (large version) is monumental in scale and captures the dreadful moments of a person who is on fire. Caught in a place between life and death, consumed by flames, the body lunges uncontrollably forward as one horrifying mass.

At Pompeii one can view plaster casts of its ancient inhabitants who were buried alive and moulded by the ash from the catastrophic eruption of Mount Vesuvius in AD79. Some of the body impressions appear resigned to their fate. In contrast to this, there is a cast of a dog whose last dying moments are captured forever in contorted agony. The natural instinct of fighting for one’s life, petrified of what lies beyond, is central to what Erebus expresses.